The Science Behind Double Glazing 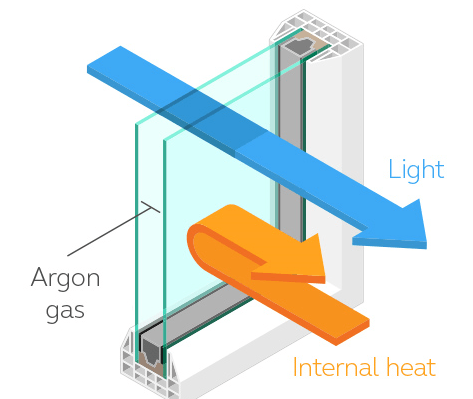 In the last century, one innovation has changed architecture and home building more than almost any other:

Early windows that sandwiched regular air between two glass panes were sucking warm air out in winter and letting in heat during summer. As a result, the insulation benefits were negligible, and condensation remained a problem.

In 1934, Charles D Haven filed a patent that described an envelope of dried air between two panes of glass.

The technology went by many other names before it was called “double glazing”:

Offices, stores, houses and Antarctic research labs* could all control internal temperatures while letting in abundant sunlight like never before.

What makes double glazing so innovative?

A spacer between the glass layers contains a desiccant to prevent condensation.

The air gap in double glazing separates two temperature zones (inside and outside). The air or Argon gas envelope slows down heat transfer dramatically.

Cold air cannot travel between the panes, and heat cannot pass through in either direction. That means a

Double glazing has the same effect on noise. The air gap slows sound waves, reducing noise by up to 70%, making your home up to 8 times quieter.

Aside from the glass and air gap,

Plus, we offer a range of glazing, including two types of toughened glass for security, privacy coatings, and toned panes.

What do penguins have to do with double glazing?

In 1939, the Byrd research expedition to Antarctica featured heavily in American newspapers. The articles all fixated on one design feature that allowed researchers to

Double glazing wouldn’t become popular in Australia for nearly half a century. Maybe it would have been a different story if penguins were roaming the streets.